Today, June 20th, we remember the World Refugees Day and, from where I am writing, there are few reasons to celebrate. I had prepared a formal essay (which will come out soon) with the new data recently published by the UNHCR – United Nations High Commissioner for Refugees – that demonstrates a massacre: never before in the history of humanity have we had so many men, women and children forced to flee and leave their own country to escape from war, violence, persecution, hunger, disease and poverty. More precisely, around 70 million people currently live “on the run”, in situations in which, most of the time, they do not even have the right to have rights. 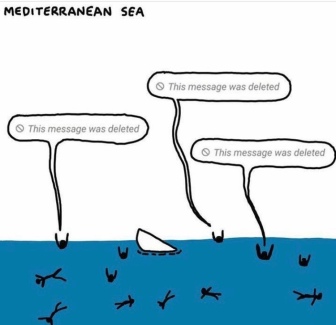 I figured of a protest essay, pointing out the absurdities that various governments (including and especially the Italian one) are doing to these people. Here, a new decree from October 2018 has made the lives of refugees more and more difficult, leading them to almost complete marginalization. I also thought of a text exposing the obscene bilateral agreements between Italy and the belligerent Libyan groups, in which Italian public money finances a war on the other side of the Mediterranean and forces thousands of refugees to live in situations of torture, rape, and the sale of organs and people. After all, throwing dust under the carpet is always the easiest solution, since all tragedy only matters to me when it knocks on my door.

I had thought of an essay about my experience at the port in these two and a half years with the Red Cross, after all, a large number of the many refugees that I saw passed through me in the disembarkations in Augusta/Sicily. I had thought, perhaps, of a text about the integration projects that I worked. Maybe I could give examples of boys and girls who, in despite of the fact that everything was against them, managed to integrate and now can work, study and feel safe.

I thought of countless paths, aware that none of them would express the totality of what today represents.

So, I decided that on this June 20th, I would do something simple: I would give names to the oxen! Yes, because even though the reality insists on treating these people as numbers, these millions of refugees that we see in the TV news are millions of “Ones”: they are Amadous, Mohameds, Mariams; they are fathers, mothers, children, brothers, grandchildren, nephews, friends; they are bakers, businessmen, students, masons, housekeepers; they are and will remain, even if everything is against, HUMAN BEINGS, with faces, histories, name, surname and dreams.

In two and a half years that I have been in Sicily, I have approached and worked a lot in a reception center for unaccompanied minors called (curiously) “Casa Freedom”. There I could see that the staff took care of the boys with something more: they were not the “28291-A December 17th Disembark”. There, they were treated as people and everyone, without exception, worked for them with love and passion. I hope one day to write more about all the beautiful things we had done for the boys there in Casa Freedom.

Two days ago, the center was closed, pushed against the ropes by the new immigration policies mentioned above that do not concern with the human beings present there. The users had three options: First, be transferred to other centers far away from where they had already minimally rebuilt their lives, found a job and a school; Second, refuse shelter and to go to the streets. Many chose the third (and most dangerous) path: escape to other countries (such as France and Germany), in which there is still the fake illusion of plentiful work, and thus assuming the clandestinity. Casa Freedom has already accommodated more than 150 minors, and, at present, there were no more than 30.

On the night of its closing, me and another volunteer had the opportunity to return there, in the quiet of the night. We met 8 boys who decided to stay, although the orders for their closure were clear. Of these, 4 boys we had already contacted saying that we would help them not to go to the street. Boys like all the others, with stories of suffering and sadness, but with great strength of will and resilience. We had a last meal, in darkness because there were afraid of the police came to the center, in that same space where we had done various activities with music and dance, where we had taught Italian to countless refugee children and which, at that moment, was the symbol of inhumanity.

The difficult task of choosing about the lives of others

Many of them needed and deserved it. I have no doubt. However, we did what we could. Don’t think it’s been easy to sleep the last few days: the moral crisis because of the desire to do more destroys me, the ethical “guilt” of deciding for the lives of others hurts me, the need of choose of who has the right and who does not push me down, the decision of who will have the chance to continue and for who the journey will start again unquiet me. There are currently 70 million: 70 million Amadous, Mohameds and Mariams. 70 million stories, dreams and faces. 70 million One’ s.

And if you’ve come this far, you must be wondering: Dude, what now?

Well, I’ll answer you with other questions, adapted from Michel Quoist:

A refugee’s smile: there is no higher reward

What motivates me every day, and particularly today, June 20th, is to be aware that the world is changed in the small attitudes of small people in small places (to paraphrase Galeano). It still motivates me to know that I may not have transformed the world, but, tonight, four little worlds today still sleep with hope for the future.

And ahhhh, the names: Karfala, Saliou, Komara and Ubaydul! For them, my “little” with all love. Stay with these smiles that we had on our table and think: What is the little I can do? 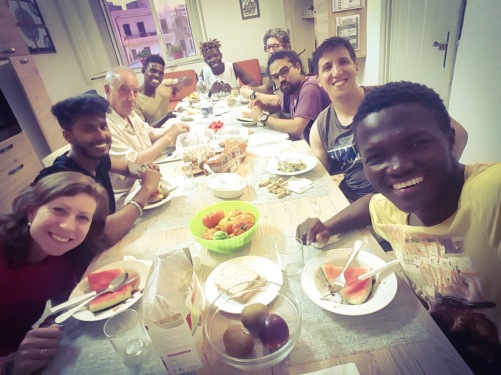 I know we can’ t change the beginning. But if we want to, we can change the ending.